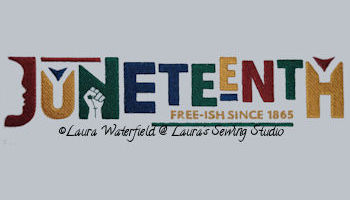 This design sews perfectly. I’m thrilled with how well this turned out.

Juneteenth is the oldest nationally celebrated commemoration of the ending of slavery in the United States. From its Galveston, Texas origin in 1865, the observance of June 19th as the African American Emancipation Day has spread across the United States and beyond.

Today Juneteenth commemorates African American freedom and emphasizes education and achievement. It is a day, a week, and in some areas a month marked with celebrations, guest speakers, picnics and family gatherings. It is a time for reflection and rejoicing. It is a time for assessment, self-improvement and for planning the future. Its growing popularity signifies a level of maturity and dignity in America long overdue. In cities across the country, people of all races, nationalities and religions are joining hands to truthfully acknowledge a period in our history that shaped and continues to influence our society today. Sensitized to the conditions and experiences of others, only then can we make significant and lasting improvements in our society.

Juneteenth (short for “June Nineteenth”) marks the day when federal troops arrived in Galveston, Texas in 1865 to take control of the state and ensure that all enslaved people be freed. The troops’ arrival came a full two and a half years after the signing of the Emancipation Proclamation. Juneteenth honors the end to slavery in the United States and is considered the longest-running African American holiday.

Confederate General Robert E. Lee had surrendered at Appomattox Court House two months earlier in Virginia, but slavery had remained relatively unaffected in Texas—until U.S. General Gordon Granger stood on Texas soil and read General Orders No. 3: “The people of Texas are informed that, in accordance with a proclamation from the Executive of the United States, all slaves are free.”

The Emancipation Proclamation issued by President Abraham Lincoln on January 1, 1863, had established that all enslaved people in Confederate states in rebellion against the Union “shall be then, thenceforward, and forever free.”

In Texas, slavery had continued as the state experienced no large-scale fighting or significant presence of Union troops. Many enslavers from outside the Lone Star State had moved there, as they viewed it as a safe haven for slavery.

After the war came to a close in the spring of 1865, General Granger’s arrival in Galveston that June signaled freedom for Texas’s 250,000 enslaved people. Although emancipation didn’t happen overnight for everyone—in some cases, enslavers withheld the information until after harvest season—celebrations broke out among newly freed Black people, and Juneteenth was born. That December, slavery in America was formally abolished with the adoption of the 13th Amendment.

The year following 1865, freedmen in Texas organized the first of what became the annual celebration of “Jubilee Day” on June 19. In the ensuing decades, Juneteenth commemorations featured music, barbecues, prayer services and other activities, and as Black people migrated from Texas to other parts of the country the Juneteenth tradition spread.

In 1979, Texas became the first state to make Juneteenth an official holiday. Today, 47 states recognize Juneteenth as a state holiday, while efforts to make it a national holiday have so far stalled in Congress.

Visit my other Juneteenth designs

This site uses Akismet to reduce spam. Learn how your comment data is processed.

Follow Me…just not too close, as I stop for fabric…often.
Search the site
Are you stable enough?

Making Lace? Stitch it right the first time. Always keep a spool each of white and charcoal Wonderfil Invisafil 100wt on hand to fill those bobbins and up your embroidery game.

"When people ask for time, it's always for time to say no. Yes has one more letter in it, but it doesn't take half as long to say."

Oh my! Where are my crayons?

Narrated by the author

"The conception of people acting against their own best interests should not startle us. We see it occasionally in sleep-walking and in politics, every day."

"Creativity is merely a plus name for regular activity. Any activity becomes creative when the doer cares about doing it right, or better."